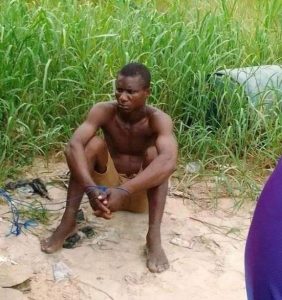 A man in Bayelsa State has allegedly killed his wife on Monday and buried her in a pit he dug in their kitchen.

According to the report which was confirmed by Butswat Asinim, the Bayelsa state Police Public Relations Officer (PPRO), a 30-year-old man whose name was given as Monday Uwem has murdered his twenty-six-year-old wife at their residence in Aparama Fishing Camp, Akassa, Brass Local Government Area, Bayelsa State.

The incident was said to have instilled fear in the residents who later nabbed the accused and handed him over to the police.

Speaking about the incident, Butswat revealed that the suspect has confessed to the crime.

“The deceased was allegedly killed by her husband one Monday Uwem 30 years, at their residence at Aparama Fishing Camp and buried her body in a shallow grave in their kitchen.”

“The suspect who confessed to the crime was arrested and detained for further interrogation and Investigation”.

In another news, Naija News reported also that a young  Brazilian man Marcelo Araújo, has murdered his wife after a heated argument on getting pregnant for the third time

Naija News learnt that a 21-year-old Brazilian man who wasn’t happy with his wife for getting pregnant for the third time confessed to brutally killing her while they were in the middle of having sex.