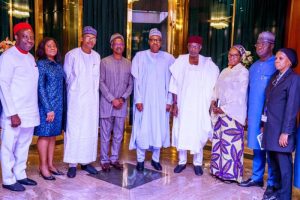 Professor Doyin Salami-led eight-member Presidential Economic Advisory Council (EAC)  has given a detailed report of the economic situation of the country.

Speaking during the submission of the report, Prof Salami, revealed that his team outlined a number of challenging opportunities facing the economy of the country such as the rate of the growth of the economy is slower than the rate the country’s population is growing; the need to strengthen national statistical agencies; reform procurement processes; improve education and the need for job planning in training offered by academic institutions.

The Council also brought to the government their views on borrowing, macroeconomic stability and the need to provide a friendly climate for foreign investment.

“We need an environment that will attract investment. People will come only when they feel confident and when they come, their exit will not be challenging,” said Prof. Salami.

The council resolved to focus on legacy projects by the administration before 2023.

Meanwhile, President Muhammadu Buhari while responding to the request of the council assured the economic advisory council that his administration will be bound by their advice. , The President also noted that the economy is the most delicate and sensitive of all aspects of national life.

However, the president also accepted that the EAC should now brief him more frequently, at least once every six weeks, instead of once every quarter, thanked the members for their patriotism and commitment in accepting the challenging responsibilities conferred on them.