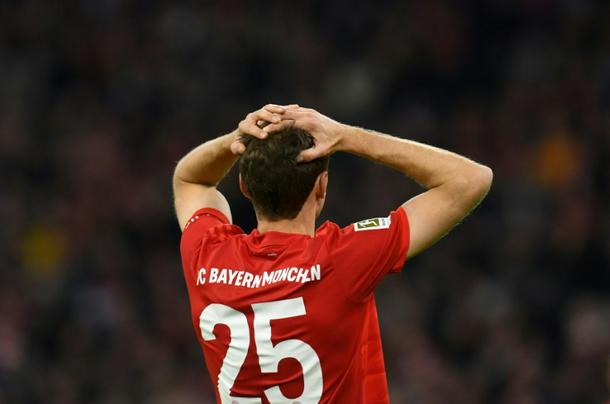 RB Leipzig held Bundesliga leaders Bayern Munich to a goalless draw at the Allianz Arena on Sunday to stay just one point behind the defending champions in the title race.

Leipzig worked tirelessly to thwart the hosts, for whom victory would have opened up a four-point gap after third-placed Borussia Dortmund’s 4-3 loss at Bayer Leverkusen on Saturday.

Bayern are bidding to win an eighth straight league title.

They were awarded a second-half penalty which was then reversed when VAR showed Robert Lewandowski had been offside.

Second-placed Leipzig often rode their luck to repeatedly frustrate Bayern, but wasted a series of second-half chances themselves.

“The problem was that both teams could live with a 0-0 draw,” admitted Bayern forward Thomas Mueller.

“In the end, neither team wanted to take the absolute risks, which meant we didn’t play to our strengths.”

“The Bundesliga will be tense until the end,” he said.

“There are a few teams with a chance.

“We want to keep our position, but it’s going to be a hard path to stay on.”

Leipzig coach Julian Nagelsmann said his side showed the bravery required to win in Munich.

“In the second-half, we had much clearer chances to win the game,” he said.

“We were brave, defended high up and had a good grip on the game.”

“In the beginning, it seemed just a matter of time before we scored,” admitted Werner.

“But in the second half we played as our coach (Julian Nagelsmann) wanted and were the better team. We could have won.”

The top-of-the-table clash, in front of 75,000 spectators, was the only top-tier fixture in Germany on Sunday.

Despite dominating possession, Bayern could not finish the first-half opportunities which fell to Lewandowski, Leon Goretzka and Thomas Mueller.

It was not until after the break that the visitors really threatened Bayern’s goal, as three huge chances went begging.

Sabitzer fired an effort over the crossbar, with the goal at his mercy, at the start of the second half.

Then Werner then pinched possession and rounded Bayern goalkeeper Manuel Neuer, who had come to the edge of the box for a clearance.

But Bayern defender David Alaba got back to block his shot and deny the striker a 21st league goal of the season.

With 53 minutes gone, Bayern were awarded a penalty when Lewandowski went down in the area after Leipzig centre-back Dayot Upamecano clipped his boot.

The Poland striker was poised to add to his league-leading tally so far of 22 Bundesliga goals this term, but was denied by VAR.

Then just after the hour mark, Werner wasted a golden chance served up to him.

He was set up perfectly by Leipzig winger Christopher Nkunku, but the could only watch as his shot flew wide of the Bayern goal.

There was good news for the hosts in the second half as defender Lucas Hernandez and winger Kingsley Coman came on for their first appearances after long-term injuries.

Sabitzer regrets firing a clear second-half chance over the crossbar

With 10 minutes left, Leipzig goalkeeper Peter Gulacsi came to his side’s rescue with a stunning, diving save.

The Hungarian did superbly well to deny Goretzka who had broken through the defence, but was left with his head in the hands as Gulacsi pushed the ball around the post.