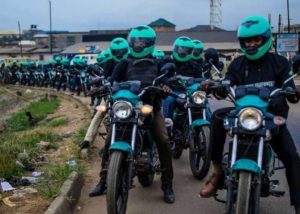 Charles Oputa, a.k.a Charly Boy, the godfather of Okada riders in Nigeria has finally reacted to the ban of Okada and tricycles in Lagos. He disowns the present crop of riders and says he is in full support of the action of Lagos State government.

Charly Boy, also called ‘Area fada’ expressed his view on Instagram today, with the title, Emergency, warning of future mayhem if the government had not curbed the proliferation of riders.

The Okada People I dey see now no be my boys. Most of them no know me and me no know dem”, Charly Boy in the post that reads more like a disclaimer and a security warning to Lagos State.

“For this action Lagos State took, I do hope more states in SW, SE will follow suit. For 25yrs, I fought for Okada People, graduates who against all odds just wanted to survive on their honest work. For over 25yrs, I have personally given away as Dash over 3,000 Okada bikes for free. The people I dey see now, no make sense Biko.”

He also allegation against some Okada riders of being members of shites and other radical Muslim groups.

Read the full detail of Charles Instagram reaction below

EMERGENCY!!!!! People dey ask me say, CharlyBoy why you allow Lagos state government Ban Keke/Okada riders for most major roads for Lagos. Say, even since dem Ban dem you never talk anything. People just dey Trek anyhow for Lagos. I go just take style answer dem. “The Okada People I dey see now no be my boys” Most of them no know me and me no know dem. For una information, I am in total support of this Okada ban based on my discussion with one of my hausa chairman in Akomora two decades ago, when I just meet again after so many years. He gave me more insight into the activites of these Okada riders.. — 1. He told me that most of the riders in Lekki are Shite members and other Muslim radicals. 2. He told me that their are other 2 – 3 groups also in Lagos / Lekki axis who could only be identified with the way they pray completely different form the normal prayers. He said, these ones are more dangerous than the Shite group but if you dont know , you will never know because they hide their identities a lot. 3 . He told me that they are coming to Lagos enmass and gathering momentum to enable them do the kind of things they practice in Kaduna, Kano etc… I was told that their new concentration bases are, Lagos and Kwara for now. My People, we must be vigilant oooo. I was amazed with the information I got from my old time Mallam friend. He told me that their Sponsors provides all the Okadas for them so that their base in Lagos will be strong enough to unleash their normal mayhem….. Chineke God Why? I can now understand why Landlords in Lekki are shouting about the level of Insecurity. Una never know anything. Amotekun is a good development but if we fail to curtail the influx of these people posing as Okada riders, then we are in for a timebomb that could explode any moment from now and thats why im in total support of this Ban. Period! Most important step on security is Intelligence with less noise in the social media. Just imagine the amount of information I gathered from a common Mallam and henceforth I will be engaging him and his likes more. For this action Lagos State took, I do hope more states in SW, SE will follow suit. For 25yrs, I fought..