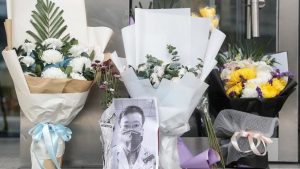 The death of Doctor Li Wenliang, a young doctor victim of the coronavirus, was confirmed this Friday, February 7 by the central hospital of Wuhan. It sparked a storm of reactions in China. Arrested, then rehabilitated, he was among the first to reveal the existence of an epidemic of viral pneumonia on the seafood market in Wuhan in late December.

“Let’s never forget Doctor Li, this doctor who spoke of a disease called “rumour “, or the hashtags “We want the freedom of expression ” … Perhaps social media had never been as not very harmonious, and in any case as little “harmonized” in China. The censors were literally overwhelmed by the anger of Internet users.

Li Wenliang, one of the doctors who raised alarm on the coronavirus: 'I think there should be more than one voice in a healthy society[.]'

The death of the young whistleblower ophthalmologist began to circulate a little before midnight, before being officially confirmed at 2.58 am by the Wuhan central hospital. Doctor Li Wenliang ” had the misfortune of being infected while fighting the new epidemic of coronavirus pneumonia,” said his fellow medical doctors on the hospital’s official Weibo account, ” we express our deepest regrets and our condolences ”.

An avalanche of online images of candles for mourning or an epidemic of ” farewell Doctor Li ” written even in the snow in large letters … No question of forgetting, no question of forgiving for some Internet users who stand out the comments of China central television announcing the arrest of doctors accused of leaking false news in late December, including the young doctor who died today.

A crackdown denounced with this other hashtag now censored, but which has circulated a lot: ” We want a public apology from the government and the police of Wuhan “. The local authorities expressed their condolences and their deep respect for the disappeared.

The Party’s Anti-Corruption Commission announced that it had sent investigators to Wuhan on Friday. Sanctions could be imposed on local officials accused of trying to silence the whistleblowers. It is not sure that this is enough to calm the anger.

The local authorities have still not made an apology on Friday, preferring to stick to the ” condolences ” addressed to his relatives. The parents of Doctor Li Wenliang, also infected with the virus, are still in the hospital, but his wife was able to get out.

The young doctor said he wanted to return to his hospital post once he was cured, on the front line facing the disease. He also defended the necessary freedom of expression is a battle of this magnitude: ” In a healthy society, there can only be one voice, ” he confided to the journalists of the investigative magazine Caixin there a few days. The drawing of his face, which invaded social networks last night, wears a surgical mask that has become a gag.

December 30: In the late afternoon, Li Wenliang posts a message on WeChat to the attention of his fellow doctors to warn them that seven patients are quarantined in the hospital. The sick were infected, he writes, with a SARS-like coronavirus (Severe Acute Respiratory Syndrome) in the Wuhan seafood market. Seven other doctors then share the information and are summoned by the police to the doctor.

January 1: The eight whistleblowers are accused of having spread rumours. They must agree in writing not to start again. ” We solemnly warn you that if you continue, you will be punished by law, ” said the document is shown by the doctor on his hospital bed. China central television reports on the arrest of people accused of ” sharing false information ” in Wuhan.

January 7: Li Wenliang gives an interview to the investigative magazine Caixin: ” A healthy society should not have a single voice “.

January 11: The doctor coughs, he is feverish and hospitalized the next day: “ At that time I was confused, he explains, because the government kept repeating that there was no human-to-human transmission and that no member of the medical profession had been contaminated ”.

January 28: The Supreme Court of Justice in Beijing believes that the people would have been better defended against the epidemic if the “rumour” spread by doctor Li Wenliang had been taken seriously. The next day, the Wuhan government tried to clear itself by asserting that the eight whistleblowers were not arrested but simply ” caught ” for having made a mistake in using the term “Sras”. These excuses, which are not, trigger an avalanche of criticism on social networks.

February 7: Wuhan Central Hospital announces the death of Li Wenliang. The doctor has tested positive for coronavirus for six days already. Doctor Li ” has unfortunately been infected in the fight against the new epidemic of coronavirus pneumonia, and all efforts to save him have failed,” said the statement published in the hospital’s Weibo account. We express our deep regret and condolences. “