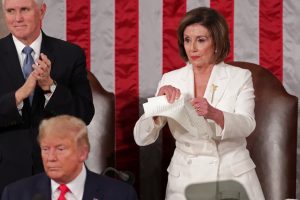 Nine months into the presidential election, Donald Trump touted his “kept” promises and a “roaring” economy on Tuesday before the entire United States Congress, without saying a word about his impeachment trial on the eve an almost certain acquittal.

The division that reigns in the political class as in the country was palpable during the traditional speech on the State of the Union: the President of the United States ostensibly avoided shaking hands that were extended to him by the Democratic leader of the House of Representatives Nancy Pelosi. And the latter, once the speech ended, tore her copy of the speech in a spectacular gesture.

At the exit, asked by a journalist to say why she had made this gesture, she launched a sibylline answer: “because it was the most courteous thing to do, compared to the alternatives”.

The White House reacted by deploring that Nancy Pelosi had thus symbolically “torn apart” a veteran of the Second World War, a baby who survived after being born premature at only 21 weeks of pregnancy, or the family of Kayla Mueller, killed by jihadists of the Islamic State group in Syria – so many guests who were in the spans of Congress and whom Donald Trump had cited in his speech.

And the Speaker of the House shook her head several times to mark her disapproval during the speech, while the Democratic camp remained seated and marble in the face of Republican applause.

In a tweet demonstrating that she had been bitten to the heart, she assured that the Democrats would always seek to find compromises but that they would not let go on the subjects that are important to them.

Trump praises “his promises kept”
“Unlike so many others before me, I keep my promises,” said Donald Trump, incessantly cut off by the standing ovations and the “USA, USA” of the Republicans, while in the other half of the hemicycle, the democratic opposition remained seated and most often of marble.

Donald Trump is going through a good period: the acquittal looming on Wednesday by the Senate will mark the epilogue of a five-month dismissal procedure that has not wavered an always loyal electoral base.

Better still, according to the latest poll from the Gallup Institute, the Republican billionaire has 49% favourable opinions, his highest score since his installation in the Oval Office in January 2017.

The icing on the cake: the Democratic primaries to designate an opponent started Monday in Iowa with a resounding fiasco.

In this same House of Representatives which indicted him for “abuse of power” and “obstructing the smooth running of Congress”, he, therefore, shuffled all the themes of the campaign to come for the November 3 poll: his “Powerful wall” against immigration from Mexico, its intention to ban “late” abortion, and the accusations against the democratic candidates who advocate according to him a “socialist takeover of our health system”.

But it was above all on the “great economic success” of the United States and the “blue-collar boom” that he emphasized, in a speech without announcement or surprise. “Our strategy has worked,” he insisted, referring to his recent trade agreements with China, Canada and Mexico. 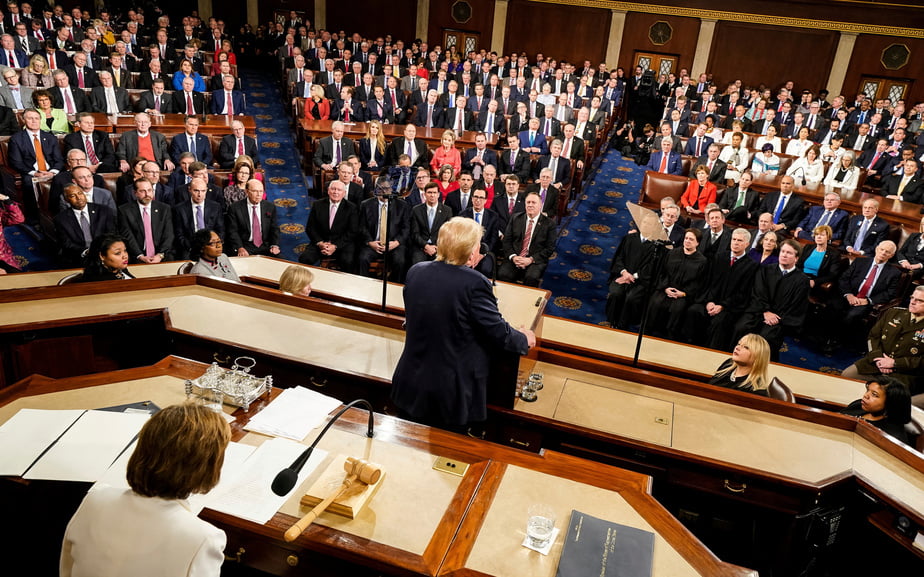 “Unlike so many others before me, I keep my promises,” said Donald Trump, constantly cut by standing ovations and the shout of “USA, USA” by the Republicans.

The president also defended his foreign policy, like his support for the Venezuelan opponent Juan Guaidó, one of his guests at the Congress, against the “socialist dictator” Nicolas Maduro with whom he promised to “break” the “tyranny” “.

He quickly passed over his confrontation with Iran and his Israeli-Palestinian peace plan, before reaffirming his intention to “bring home” eventually American soldiers from Afghanistan where, he said, they are not intended to provide “policing for other countries”.

The last nod to his camp, Donald Trump has finally announced that Rush Limbaugh, radio host and figure of the conservative sphere who has just revealed that he suffered from lung cancer, will receive the “Medal of Freedom”. It was presented to him, with hearty applause, by first lady Melania Trump.

At no time has “impeachment” been mentioned. The president, whom many Republicans urged to turn the page quickly, therefore kept a low profile on this point like his distant Democratic predecessor Bill Clinton during his great annual speech in 1999.

But the shadow of the trial, which marked a final break between the Trumpists and the Democrats, hung over the hemicycle.

Opposition politicians have most often refrained from applauding, while previous speeches on the state of the Union may have been punctuated by more consensual parentheses.

Alexandria Ocasio-Cortez, youngest member of the Congress and rising figure of the Democratic Left, is one of the elected officials who boycotted this institutional meeting so as not to “legitimize” a president who, according to her, does not respect the laws or the Constitution. Others left in the middle, denouncing his “lies”.

The Democrats are demanding the dismissal of the 45 th president of the United States for trying to force Ukraine to “sully” his opponent as possible presidential Biden, including by freezing a crucial military aid to that country in war.

Charged in mid-December by the House of Representatives, dominated by the Democrats, Donald Trump knows that he can count on Wednesday on the support of almost all of the 53 Republican senators. However, the Constitution requires a two-thirds majority (67 senators out of 100) to find him guilty.

Since the scandal erupted, the White House host claims to be the victim of a set-up orchestrated by his opponents who would not have digested his surprise victory of 2016. Again on Monday, he denounced on Twitter a ” masquerade “hatched by” democrats-who-do-nothing “.