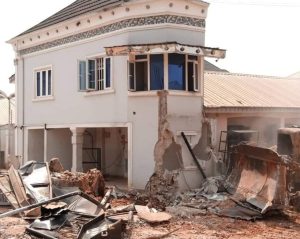 The Governor of Edo State, Godwin Obaseki, has demolished the hotel belonging to Tony Adun, popularly known as Kabaka.

The T. Latifa hotel which is located at Ugbor area of Benin City was demolished on Wednesday.

Adun is a former aide of the National Chairman of the All Progressives Congress, Adams Oshiomhole.

The state government while speaking on its decision noted that the property violated the building laws of the state and that it sits across a road in the Ugbor-Amagba axis of Oredo Local Government Area.

The special adviser to the Edo State Governor on media, Crusoe Osagie, further stated that the deed of a transfer being paraded by Adun was also not registered with the state government.

Kabaka while reacting to the demolition, appreciated the elite in Benue, and noted that he has survived in the hands of the Edo State Governor, Godwin Obaseki.

He rained curses on the people involved in the demolition of his property, he also called on the Niger Delta Avengers to wait and see the outcome of the demolition.