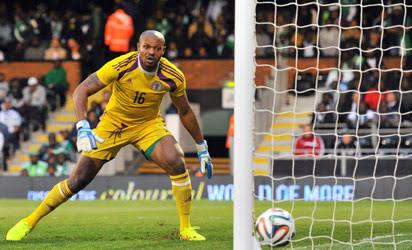 Austin Ejide has sensationally said he was ready to return to Super Eagles and help the team  solve goalkeeping conundrum.

But at present, Nigeria has no goalkeeping problem with the Kaizer Chiefs goaltender, Daniel Akpeyi, still at his best, may be Ejide is coming as a trainer now.

Ejide made his debut 19 years ago and while he mostly played second fiddle to Nigeria legend Vincent Enyeama, he did enjoy regular game time in 2008 before completely falling out of favour.

But with Nigeria struggling to find a long-term successor for Enyeama, Ejide is confident that he should be the man to start for the West Africans.

Regular first choice Francis Uzoho will remain sidelined for the foreseeable future with a serious injury while Daniel Akpeyi’s inconsistent form has attracted a lot of criticism in the past.

Ejide has played every minute for Israeli Premier League side Hapoel Hadera this season and believes he is the man to solve Gernot Rohr’s problems.

“I know the situation in Nigeria. I get positive remarks in Israel and being rated highly could be something that will pave the way,” Ejide told BBC Sport.

“I’ve kept nine clean sheets this season and we all know that goalkeepers always get better with age.

“I’ve also been following the Eagles and I believe that with my consistent performances in Israel, there is every chance it opens the door to the possibilities of another call-up,” he concluded.