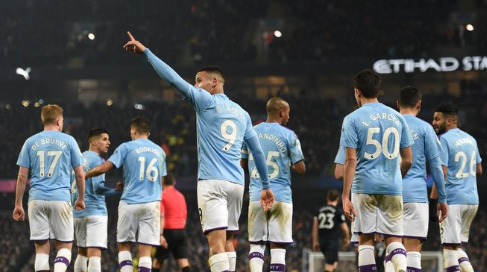 Gabriel Jesus extended his remarkable record against Everton as the Manchester City striker’s second-half brace sealed a 2-1 win on Wednesday.

Jesus was handed the start as City manager Pep Guardiola rested Sergio Aguero, but the decision to select the Brazilian ahead of the club’s record goalscorer could easily have been inspired by his mastery of Everton. 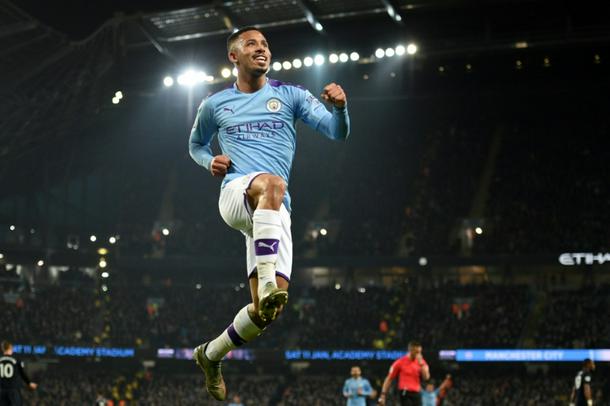 Repaying his manager’s faith, Jesus feasted on the Everton defence once again.

He has now scored seven times in his last five appearances against the Merseyside club, who must be sick of the sight of him.

City remain third in the Premier League after a second successive win left them 11 points behind runaway leaders Liverpool, who have two games in hand on the champions.

Richarlison got one back for Everton, but it was a first defeat for new boss Carlo Ancelotti, who had masterminded wins over Burnley and Newcastle in his first two matches since replacing the sacked Marco Silva.

The former Chelsea chief got the better of Guardiola in their previous meeting – two Real Madrid wins against Bayern Munich in the 2014 Champions League semi-finals.

There would be no repeat against a City side with a point to prove after a spluttering end to 2019.

Two Gabriel Jesus goals are enough for Pep Guardiola's side, despite Richarlison's strike making for a tense finish#MCIEVE pic.twitter.com/TD0aBJ4gUz

City won 10 trophies, including four Premier League titles, in the decade just closed, but Liverpool’s remarkable form over the last 18 months is a serious threat to that dominance.

Guardiola has already conceded City have no chance of catching Liverpool this season, instead setting his sights on a more sustained challenge next term by admitting they need to “play better and pray”.

There was no need for divine intervention against Everton, although with Aguero, Raheem Sterling and Kyle Walker among those left out by Guardiola, the visitors nearly snatched a shock lead when Seamus Coleman’s volley forced a one-handed save from Claudio Bravo.

City thought they had taken the lead when Phil Foden met Joao Cancelo’s cross with a close-range finish in the 13th minute.

But the hosts’ celebrations were curtailed by VAR as the goal was ruled out for a tight offside against Riyad Mahrez, who had supplied the pass to Cancelo.

It was the latest VAR decision to go against City this season and Mahrez responded with a stinging drive that forced a good save from Pickford.

City should have been in front just before half-time when Jesus picked out Mahrez in space in the area, yet the Algerian dragged his shot wide.

Guardiola’s team have failed to score a first-half goal in six of their last eight home league games.

But they only needed six minutes to take the lead after the break.

Ilkay Gundogan’s pass split the Everton defence and Jesus took a touch inside before a curling a fine finish into the far corner.

Dominic Calvert-Lewin had five goals in his last five appearances and the Everton forward nearly grabbed an instant equaliser with a close-range header that flashed wide.

It was a crucial moment as Jesus struck again in the 58th minute.

Kevin De Bruyne teed up Foden and he found Mahrez as City carved opened the Everton defence before Jesus applied the finishing touch with a powerful low drive for his 13th goal of the season.

City went to sleep in the 71st minute, allowing Richarlison to slot home after Claudio Bravo made a hash of passing to Fernandinho.

Jesus wasted a chance to kill off Everton when his close-range shot smacked the post in a nervous finale, but City held on.