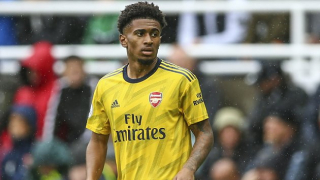 Nelson broke the deadlock with a scruffy finish from Alex Lacazette’s deflected pass, and Arteta says our matchwinner is heading in the right direction.

“I am very pleased with him, how he’s training, how he’s reacting, how willing he is to learn,” he said.

“He’s asking the right questions, I know about his ability, I’ve known him since I was here and I coached him when he was 16. I know his potential and now he needs to put things away.

“I am really, really pleased with Reiss, I think he needed that goal as well for his confidence, I think he needs to improve his end-product a little bit in the final third, but he’s doing all the right things.”