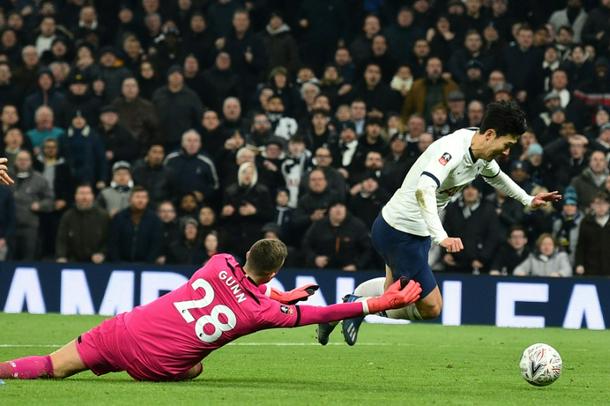 Mourinho’s side were 12 minutes away from being knocked out after squandering the first-half lead given to them by Jack Stephens’ own goal.

Shane Long and Danny Ings scored as Southampton hit back to take the lead at the Tottenham Hotspur Stadium.

“I have to be honest and say I think the best team lost on the pitch but my team were the ones with more heart and went to their limit,” Mourinho said.

“We suffered but we deserved to win because we were in our limits. Southampton were fresher than us but we played with our souls and heart and gave absolutely everything.”

Tottenham, who last won the FA Cup in 1991, will host struggling Norwich in the fifth round in the first week of March.

Aiming for the first trophy of his reign, Mourinho, who replaced Mauricio Pochettino earlier this season, will be relieved Tottenham avoided a surprise exit from a competition he has not won since 2007 with Chelsea.

Taking credit for the win in classic Mourinho self-promoting style, he said: “I think I did very well because I had to manage a team with so many difficulties.

“The priority is to survive. We have lots of difficulties. I’m not speaking just about Harry Kane, I’m speaking about injuries to Giovani lo Celso and Erik Lamela.

“Today was a team completely unbalanced, really hard to organise it.”

Tottenham are without a major trophy of any kind since the 2008 League Cup and Mourinho would dearly love to end that drought, but his team will have to improve significantly on this erratic display.

Mourinho will also have to get Jan Vertonghen back onside after the defender’s dejected trudge off the pitch following his substitution.

“I understand his sadness, it is normal. He is always respectful and always professional. It doesn’t make me happy to make a substitution. I did it for the team, Jan is happy for the team,” Mourinho said.

Tottenham had won eight of their last nine home games against Southampton, including a 2-1 success in the Premier League earlier this season, and they were in front after 12 minutes.

Ryan Sessegnon’s burst opened up the Southampton defence and when the ball bounced to Tanguy Ndombele on the edge of the area, the midfielder drilled a powerful shot that took a big deflection off Stephens into his own net.

Ings should have equalised when he ran onto James Ward-Prowse’s pin-point pass and got to the ball ahead of the hesitant Hugo Lloris, but the in-form striker’s shot cannoned back off the bar.

Southampton’s 34th-minute equaliser carried more than a whiff of blame for Lloris, who limply parried out Nathan Redmond’s shot for Long to slot home.

There was a blow for the visitors before half-time when Ward-Prowse was stretchered off after needing oxygen for a knee injury suffered in a challenge with Sessegnon.

Ralph Hasenhuttl’s side deservedly took the lead in the 72nd minute.

Redmond made an incisive surge from deep inside his own half and slipped a pass to Ings, who cut past Japhet Tanganga before curling a fine finish into the far corner from 18 yards for his 17th goal of the season.

Read Also: Mourinho comically goes from smiling to fuming in a split second

But Lucas came to Tottenham’s rescue in the 78th minute when he took Dele Alli’s pass and cleverly turned into the space on the edge of the area before drilling a superb strike into the far corner.

The momentum had swung in Tottenham’s favour and Son won it in the 88th minute when he charged into the area and went down under minimal contact from goalkeeper Angus Gunn.

Son stepped up to take the penalty himself and fired home to send Tottenham into the last 16.