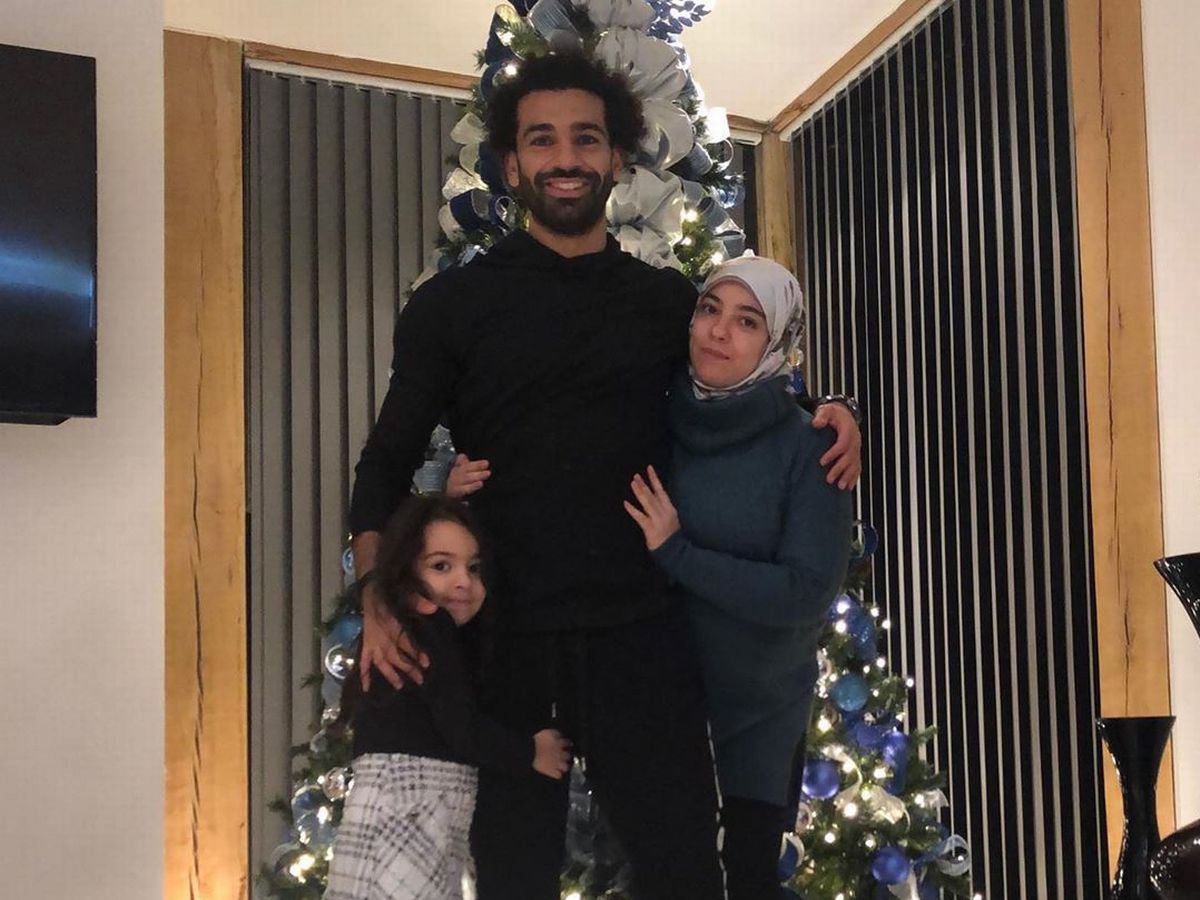 Liverpool star, Mohammed Salah, has divided opinions after taking a photograph with his family close to a Christmas Tree which he shared on his verified Instagram page.

The post was accompanied by emojis of two pine trees generated 2.6m views and 36,700 comments.

While some of his followers saw it as a celebration of his family life, others commended him for his objectivity towards another faith.

Another group felt Salah had gone beyond the boundaries as a Muslim.

He was compared with fellow Muslim and French professional footballer, Karim Mostafa Benzema, who plays as a striker for Spanish club Real Madrid and the France national team.

Salah was advised to emulate Benzema who did not say anything about Christmas to his teeming 31.6m Instagram followers.

See some of the comments for and against Mo Salah’s Christmas tree family photograph:

“@mosalah are you aware that you are celebrating the claim that Allah the one, the sustainer & controller had a son who was given birth on this day? Have you lost your mind” —mbizzofficial

“Celebrating Christmas is a sin. Really surprised to see you next tree. Karim Benzema is also a Muslim and did not. Then Merry Christmas to you!” —muhammad.k_01

“Did u ever see a jewish or a christian celebrating mawlid or eid al adha?no!cause its not from their religion!and xmas is not from our religion (Islam)” —adamdahabreh.

“Christmas is not halal (permissible)” —Tyrinnj

“Quran 2:120: And never will the Jews or the Christians approve of you until you follow their religion. Say, ‘Indeed, the guidance of Allah is the [only] guidance.’ If you were to follow their desires after what has come to you of knowledge, you would have against Allah no protector or helper.” —iamabdullahijr99

“This is a sign that shows you are celebrating Christmas and it is not allowed for us Muslims. may Allah guide you to the right path you are trying to make happy your non Muslim friends and show some respect but You should think about what Allah have said in his holy book: ‘And never will the Jews or the Christians approve of you until you follow their religion.’ Say, ‘Indeed, the guidance of Allah is the [only] guidance.’ If you were to follow their desires after what has come to you of knowledge, you would have against Allah no protector or helper. Be proud of WHO you are and WHAT you believe.” (2:120) — my_success_is_only_by_allah11

“Why do you have a Christmas tree” —mustakim.10

Other followers have different view of the whole issue.

For instance, a follower cautions that Salah might really not have owned the tree: “Stop judging any1 so fast u all! U guys dont even know how to react firstly and come here and criticize him maybe its not his home or he must be somewhere with his family and just a random click with his family near that xmas must be looking nice so he posted. has he written or wishing Christmas to any1 No!!! Without wishing also he tried to respect them so
dont u guys think dats beautiful stop judging some1 so fast plzz…” —khizirahmad.

Another described the reactions as “ignorance:” “The amount of ignorance in this page is tremendously high. Everyone ready to judge Mo just because he’s the first arabic who’s trying to create a connection between 2 different world and cultures. You should try to appreciate his effort, instead the only thing you can do is insulting your christians brothers on their happiest day. Shame on you! Do you wanna be a good Muslim? Stop judging,
offending and try to be kind with all people in this world. Respect other cultures and people will stop saying bad words about Islam. You all are the worst part of Islam, not Mo” —nader_malak

read also: I can see Messi in Salah–Wenger reveals after Liverpool cruise into final

Jerzykutyla1212 summarised the thoughts of those who didn’t see anything wrong in the action: “For all you who are so upset with King Mo, Salah did more for Islam in last few years than you will do in your lifetime. He is a good Muslim, good husband, good father and a genuine wonderful person. If we all try to be more like him, this world would be a better place.”