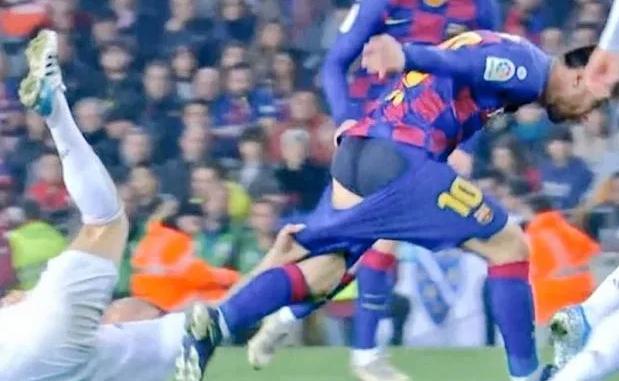 Barcelona and Real Madrid drew 0-0 in their first clash of the season on Wednesday.

And there was little to write home about for either side in the first goalless clash between the pair in 17 years.
Gareth Bale had a late strike ruled out by VAR at the Nou Camp.
And outside, pro-Catalan demonstrations turned violent as flag-wavers fought with baton-wielding police.
However, for some, the main highlight of the match was when Messi had his shorts pulled down by Kroos while trying to make a barnstorming run.
Luckily, the Argentine was remembering to wear his pants.
But some fans declared the incident had indeed tickled their respective ribs.
One wag wrote: “That’s the highlight of his career.”
Another exclaimed: “Casemiro said Kroos controls the pace of the game.
One chimed: “More like Messi’s extended highlights.”
Another added: “You should be thanking him.”
Messi can at least take comfort from his record SIXTH Ballon d’Or win earlier this month.
And the ace is now one above fierce rival, Juventus star Cristiano Ronaldo.
However, Barcelona boss Ernesto Valverde claims Messi could soon retire from professional football.
He said: “It’s something natural, it’s normal. Leo is 32 and although I don’t think he’s thinking about retiring now, it’s something which is in the air.
“But I don’t think we should go crazy about it, we have to look at it naturally.

read also: I lost my virginity at 13, says Maradona
“Everyone thinks about retirement when they get to a certain age, but just because he’s thinking about it doesn’t mean he’s going to retire in the next three days.”