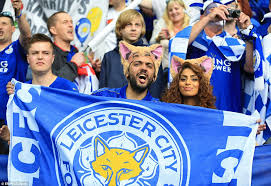 Leicester City supporters attending the Premier League fixture against Liverpool at King Power Stadium on Thursday 26, December will receive a free beer or water as a thank you for their excellent support so far this season.

There will be four stations located around the ground for home fans to enjoy a pre-match beverage on the production of a valid home match ticket for the game against Jürgen Klopp’s side.

Please note there will be one beer or one bottle of water only for each supporter.

Furthermore, a choir and brass band will be performing on the brickweave outside the stadium ahead of kick-off, while Dairy Milk Freddo Treasures will be handed out to everyone who has a go at Leicester City in the Community’s inflatable goal.

At half-time, LCFC branded t-shirts will be given away to fans through t-shirt cannons on the pitch!

The beer and water stations will open at 5pm and close at 7:45pm.

Alcoholic drinks only available strictly to those aged 18 and over in accordance with the Challenge 25 policy, while bottled water will also be provided as an alternative.