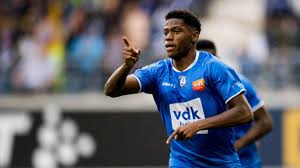 The 20-year-old Canadian forward has shone in the Belgian First Division this season netting 12 goals and notching 8 assists in just 22 appearances.

“Do not go from Gent to a small club,” Degryse told David in an interview with Het Laatste Nieuw.

“Rather wait. Something big will come. And that top club will come.

“I think Manchester United is something for you – I’m sure you will be there in about a year and a half. Believe me.”