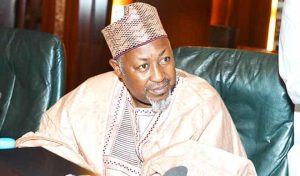 The student who broke a 58-year record of the University hail from Madori Local Government Area of Jigawa state studied Arabic in the university and graduated with a Cumulative Grade Point Average of 4.73

The Arabic Department of the Ahmadu Bello University has a reputation that no student ever graduated with First Class since its creation in 1962.

Governor Muhammad Badaru Abubakar made the pronouncement today while receiving the student at the government house.

He, therefore, congratulated Safiyu Haruna for the new record and also pledging to sponsor the student to further his studies overseas in other to motivate other students to focus on their studies.

He also assured that his government is determined to continue to give more priority to the education sector.

The student Safiyu Haruna then thanked the Governor and all stakeholders for the gesture and promised to be a good ambassador of the state.