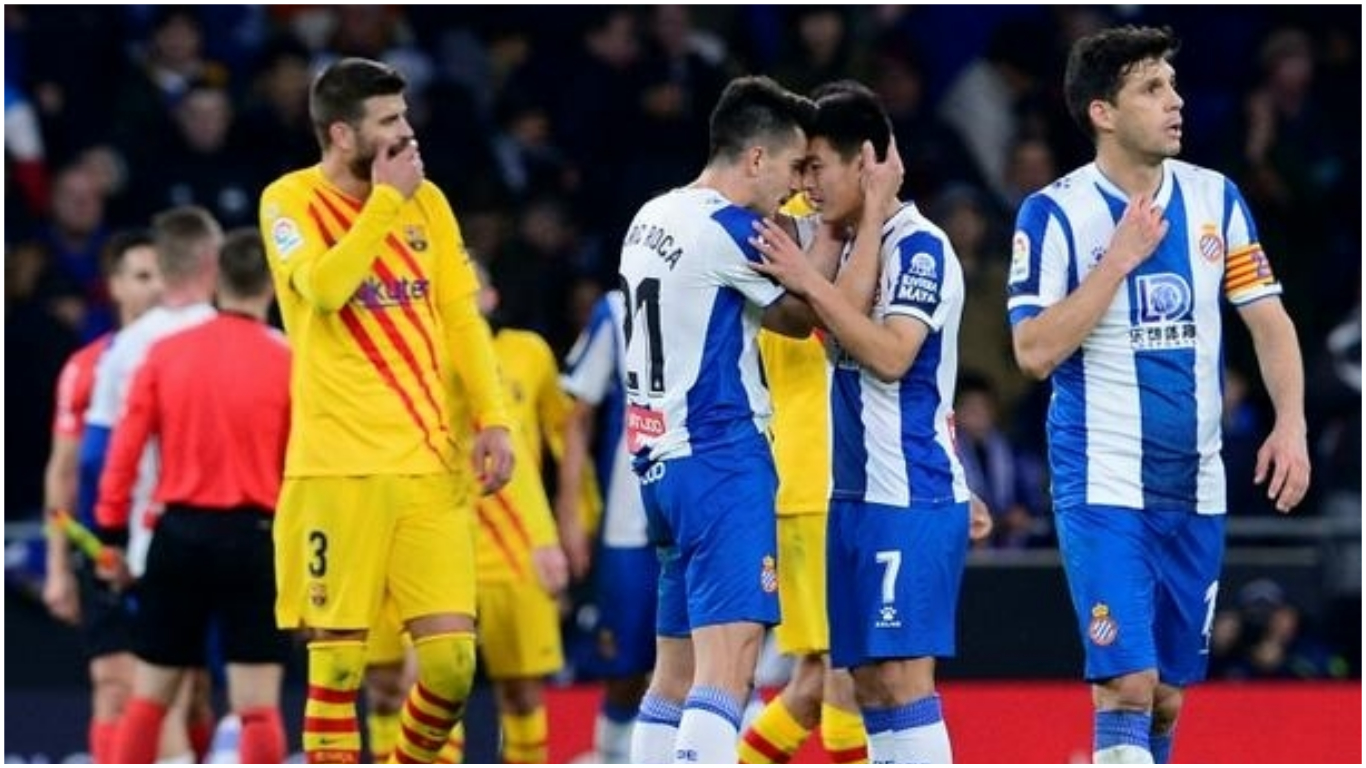 Barcelona were pegged back by La Liga’s bottom club Espanyol on Saturday as Wu Lei struck late to secure a dramatic 2-2 draw in a thrilling Catalan derby.

Luis Suarez appeared to have inspired another turnaround at the RCDE Stadium after he cancelled out David Lopez’s opener with a deft half-volley before digging out an exquisite pass for substitute Arturo Vidal to finish.

“We could have scored a third and then in one play we conceded. We had the game under control. The red card unsettled us a little.”

Barcelona remain top of the table but only on goal difference, their two-point advantage removed after Real Madrid earlier clinched an impressive 3-0 win away at Getafe.

Atletico Madrid moved up to third after beating Levante 2-1.

Espanyol have not beaten their local rivals in the league since 2009 and are still four points from safety, yet this performance should do wonders for morale.

They will be hoping for another rescue mission from new coach Abelardo, who took over Alaves with six points from 13 games in 2018 and led them to 14th.

“This can be a turning-point,” he said. “But we have to compete just like today because it won’t be easy.”

Barca now switch their attention to the Spanish Super Cup in Saudi Arabia next week, where a Clasico final awaits if Real Madrid beat Valencia in the last four and they can overcome Atletico.

But Valverde will have much to ponder after defensive problems again undermined his team against the league’s bluntest attack.

Lopez was unmarked as he headed in Marc Roca’s cross in the 23rd minute while at the other end chances were few and far between, with Lionel Messi going closest with a header at the back post.

Vidal came on at half-time for Ivan Rakitic and Suarez worked his magic, angling his foot perfectly to divert Jordi Alba’s cross inside the near post before picking out Vidal to make it 2-1 nine minutes later.

De Jong received a second yellow card for pulling Jonathan Calleri’s shirt but Barcelona were in command until the 88th minute when Wu struck.

Freed by an excellent reverse pass by Matias Vargas, the 28-year-old shot across Neto and into the far corner.

Espanyol might even have won it in injury-time as Calleri raced clear, only to fire over with two team-mates free inside him.