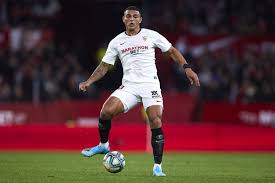 Liverpool are prepared to pay €75m to beat Real Madrid to the signing of Sevilla center-back Diego Carlos, according to a report.

The defender moved to Spain from Ligue 1 side Nantes in the summer and has impressed, appearing in all 18 of his side’s La Liga games this term to help the club into third place in the table.

What’s more, the 26-year-old has netted twice in that time and recent reports linked Liverpool with interest in the player, claiming that the Reds had tabled an offer for his services.

According to Spanish news outlet El Desmarque – the source of the original report – Madrid boss Zinedine Zidane eyes Carlos as an ideal replacement for Sergio Ramos.

However, the source adds that Liverpool also remain  keen and are willing to do what it takes to beat their European rivals to his signature.

It is claimed that Jurgen Klopp‘s side could activate the €75m release clause in his contract to bring him to Anfield.

Carlos, it is said, has “everything” to be able to become one of the best center-backs in the world and would reportedly benefit more by moving to Merseyside than to the Spanish capital.

Liverpool have four senior center-halves within their ranks this season and recently added a fifth after Nathaniel Phillips was recalled from his loan with Stuttgart.

However, Dejan Lovren and Joel Matip are both currently out with injury and Fabinho – who has filled in at the back before – is also sidelined.

Klopp opted for Jordan Henderson to partner Joe Gomez in the Club World Cup semi-final last month due to illness to Virgil van Dijk, although Van Dijk and Gomez have impressed since returning as a partnership.

In other Liverpool news, the Reds are reportedly keeping tabs on Norwich duo Emiliano Buendia and Jamal Lewis ahead of a potential double swoop.

Buendia has seven Premier League assists this season – one behind Trent Alexander-Arnold – and has created a chance every 26 minutes on average this term.

Such a record is only bettered this season by Manchester City midfielder Kevin de Bruyne and Buendia – along with left-back Lewis – are said to be players Liverpool are well aware of.

Lewis could be seen as a more natural option at the back for Klopp than James Milner, who has filled in due to Liverpool’s absence of a second-choice in the position since Alberto Moreno’s departure.

The post Liverpool willing to splash out €75m for Carlos appeared first on Sporting Life.