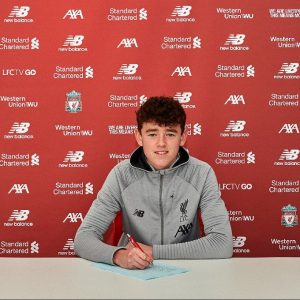 Naija News understands that Hill made his debut for Liverpool’s Under 18 last August against Blackburn Rovers.

Liverpool disclosed this in a statement on its official website on Thursday.

“The 17-year-old has scored two goals against Blackburn Rovers (Under 18) in his debut last August. Hill, an attacking midfielder from Formby, has been at Liverpool’s Academy since U6 level. He has scored eight goals for the club so far this campaign.

“Hill made his senior debut for the Reds in an away Carabao Cup quarter-final encounter against Aston Villa.”

Here is the club’s tweet below celebrating Tom’s signing.