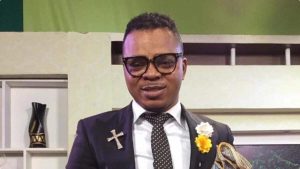 A controversial Ghanaian pastor, Bishop Daniel Obinim has reportedly started selling a special anointing oil which he claims is capable of protecting users from contacting the coronavirus disease.

The cleric is said to have told his congregation last Sunday that fears about the virus hitting Ghana and affecting people forced him to seek God’s help in coming up with the oil.

The anointing oil is said to cost Ghc 200 (N13,000) and he claims it is capable of protecting its user from contacting the virus both physically and spiritually.

Bishop Obinim who is the founder of the International Godsway Ministries is not a stranger to controversies as he previously claimed to have the direct phone number of God and calls him anytime he likes.

He also claims as reported by GHPage that the anointing oil has been vetted and approved by the Heaven’s Division of Food and Drugs Authority (FDA) and does not need any approval from any earthly government agency.

Naija News reports that since the outbreak of the deadly coronavirus, close to 500 deaths have been reported with another 200 sick and receiving treatment.

Two deaths have also been reported outside of mainland China.