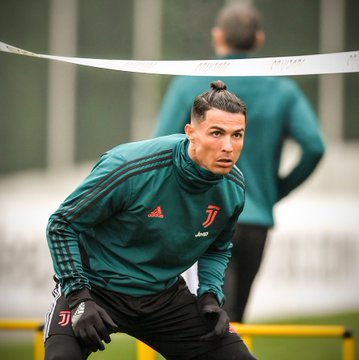 Cristiano Ronaldo was back in Juventus training on Monday, as Maurizio Sarri’s men got back into the swing of things ahead of Serie A’s resumption this weekend.

The Portuguese superstar, 34, was back in Turin with his teammates just 24 hours after scooping another award, the ‘Best Player’ gong at the annual Dubai Globe Soccer Awards.

Ronaldo had attended the awards with his eldest son, Cristiano Jr, and girlfriend Georgina Rodriguez, as well as his agent, Jorge Mendes – who picked up the ‘Best Agent’ award.

The ex-Real Madrid forward had spent the last four days in the Middle East, appearing as a panelist at a sports conference in Dubai on Sunday.

The Portugal captain returned to Italy via private jet with his family on Sunday night, before being thrust into action with Maurizio Sarri’s men on Monday afternoon at the club’s facility in Vinovo following their Christmas break.

There Ronaldo unveiled a new look, with the Portuguese showing off his new hairstyle, presumably copying his former Real Madrid teammate Gareth Bale.

Maybe both. Probably neither. But it explains that headband he’s recently been wearing.

Regardless of his hairstyle, Ronaldo and Juventus have it all to do in the second half of the Italian season, where they will be looking to bounce back after their surprise Italian Super Cup defeat to Lazio on December 22.

Sarri will be banking on Ronaldo, whether his new look remains or not, to step up in the second half of the campaign, having scored 12 goals in 21 appearances so far this term – a relatively lean figure given his history-breaking exploits during the past decade.