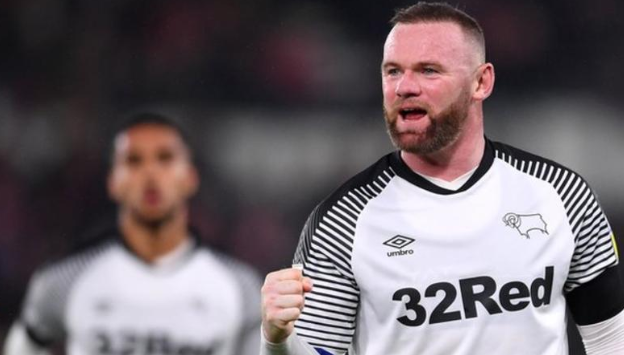 Wayne Rooney impressed on his Derby County debut as he provided a stunning assist in a 2-1 win over Barnsley at Pride Park.

The 34-year-old was named in Derby County’s starting XI and handed the captain’s armband for the Rams’ clash with Barnsley.

Derby boss Philip Cocu had hinted Rooney would make his debut as a substitute but has thrown him straight into the action in a bid to revive his struggling side.

Rooney is tasked with injecting new life into a Derby team sat in 17th place in the Championship table ahead of the game.

And he achieved that early doors as he provided an assist from a free-kick for Jack Marriott to put Derby ahead before the half-time break.

In the second half Rooney could and should have scored Derby’s second but he miscued his header from just a few yards out, as the ball dribbled wide.

He was in the thick of the action again as he hit a brilliant crossfield pass to Andre Wisdom, who crossed for Martyn Waghorn, who made it 2-1.

The Rams were beaten 2-1 by Charlton on Monday and are without a win since beating Preston North End 1-0 on November 23 – a run spanning eight games.

Rooney was used as a midfielder by Cocu, where he played regularly during his final seasons at Manchester United.

It was revealed back in August that Rooney would join the Rams in January as a player-coach on an initial 18-month deal.

Rooney still had more than two seasons remaining on his contract at DC United but cited a desire to be closer to his family back in England.

The 34-year-old enjoyed a successful period in the MLS, scoring 23 goals in 41 league games for the Washington-based club.

Prior to his move to America, Rooney spent 13 years at Manchester United between 2004 and 2017, where he became the club’s all-time leading goalscorer with 253 goals.

Rooney also achieved the same feat for England, scoring 53 goals in 120 appearances for the Three Lions before retiring from international football in November 2018.