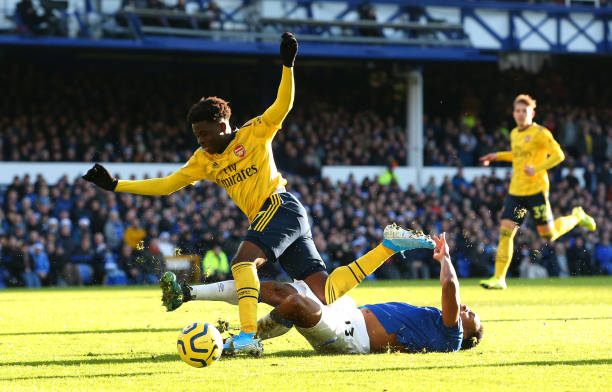 Former English Premier League referee Dermot Gallagher has said that Arsenal striker, Bukayo Saka was fortunate to have escaped a second yellow card in Saturday’s 0-0 draw against Everton at the Goodison Park.

In his post-match review of matches played in the premier league at the weekend, Gallagher said Saka should have been sent off by centre referee Kevin Friend for raising his boots on Dominic Calvert-Lewin.

“The player is not aware that he’s there, he boots his boot up and it’s reckless. He runs the risk and I think if referee Kevin Friend had decided to pull out a second yellow card to send him off, he couldn’t argue. The only thing is Saka’s favour is he doesn’t see the player coming,” he said on Sky Sports.

Saka who was on for 90 minutes is a cover for the injured duo of Kieran Tierney and Sead Kolasinac.