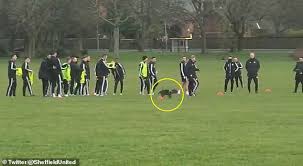 Sheffield United’s pre-match warm-up session ahead of tonight’s clash with Liverpool was brought to a halt by a dog taking a wee on a training cone.

Chris Wilder’s underdogs were completing warm-up drills in the shadow of Anfield — on the famous Stanley Park.

Wilder and his coaches set out a series of cones as they did various drills just 100 yards from the Kop.

The players were in stitches as the pup relieved his bladder on one of the training cones before running away.

They said: “Just trying to do an activation session in peace.”

The Blades can leapfrog Manchester United into fifth if they clinch an unlikely victory at Anfield tonight against Jurgen Klopp’s runaway league leaders.

The newly-promoted side suffered their fifth defeat of the season against champions Manchester City on Sunday as they lost 2-0.

Liverpool-born Jack O’Connell is looking forward to playing against the team he supported as a kid.

He said: “I’ve never played there before so it’s going to be an unbelievable experience for me.

“It’s always been my dream to walk out there with the Kop bellowing out ‘You’ll Never Walk Alone’ and now I can.

“I’ve managed to get 12 tickets for relatives and mates.

“Everybody has their favourite game — this will always be No1 for me.”