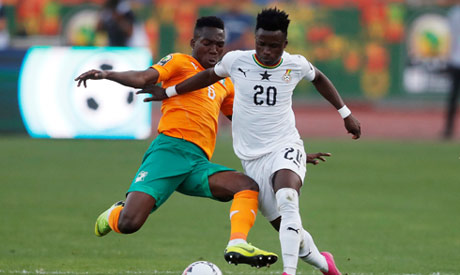 It was an epic battle Tuesday in Egypt and Cote d Ivoire and Ghana clashed in one of the semifinals of this year U23 Nations cup.  The tie which brought out the fighting spirit of both teams ended 2-2 at regulation time.

The Ivorians had shot into the lead in the 13th minute thanks to Youssouf Dao who eventually made it a brace in the 85th minute. The Black meteors however equalised through Yaw Yeboah and Evans Mensah respectively.  With no clear victor after 90 minutes both teams went into yet another explosive 30 minutes clash with score line still at 2-2 after 120 minutes, forcing penalty shootout.

It was however the junior Elephants that laughed last as they triumphed in the penalty shootout converting three of their four kicks while the Black Meteors converted only two out of five kicks.

While Ivoirians at home had cause to smile following the exploits of the junior Elephants in Egypt, same cannot be said of the senior elephants as they lost 2-1 to Ethiopia in Addis Ababa in the 2021 Nations Cup qualifiers.

Although the Black Meteors failed in their bid to play in the final they nonetheless remain in contention in the quest for a ticket to the 2020 Olympics in Tokyo.

Three countries will fly the continents flag at the Olympics, the two finalists and winner of the third place match. Defending Champions Nigeria failed to go past the group stage after losing by a lone goal in the opener, beating Zambia 3-1 in the second match and settling for a draw against South Africa to finish third in the group.