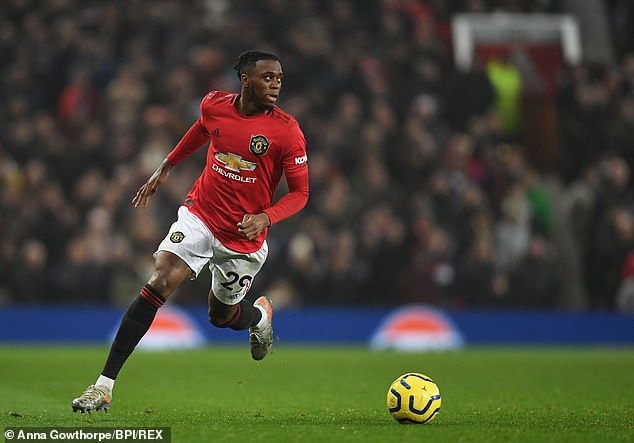 Aaron Wan-Bissaka will put family loyalties to one side when Manchester United kick off 2020 with a trip to Arsenal.

Wan-Bissaka grew up in a family of Arsenal fans and his father revealed he even used to call the now United right-back Thierry Henry when he was younger.

But Wan-Bissaka will be aiming to get one over the Gunners and boost United’s top-four hopes at the Emirates following his £50m summer move to Old Trafford.

‘What’s more important, Arsenal winning or me playing well?’ Wan-Bissaka asked his dad Ambroise in a video released by his sponsors Adidas ahead of the New Year’s Day clash.

Ambroise said: ‘You playing well because I like you, game by game, to improve and play well, not for Arsenal to win.’

His older brother Kevin admitted: ‘See when you play against Arsenal, it’s going to be a sticky one for me. I’d take a draw.’

‘I’m going for a win all the way,’ Wan-Bissaka said.

Explaining the family ties with Arsenal, Ambroise said: ‘We have been supporting Arsenal since we saw Thierry Henry and how good he was.

‘When we came to this country, Thierry Henry was good and everyone knew Thierry Henry at that time. When Aaron was growing up, I would call him Thierry Henry. When we supported Arsenal games we must all sit down and watch.’

Wan-Bissaka missed United’s 1-1 draw against Arsenal in October so he is in line to face them for the first time since his big move from Crystal Palace on Wednesday.

He has been of United’s standout performers this season and his importance underlined when he was rested for Saturday’s trip to Burnley partly to avoid the possibility of getting a fifth booking that would have ruled him out of the Arsenal trip.

United’s 2-0 victory at Burnley lifted Ole Gunnar Solskjaer’s side up to fifth and they start the new year four points behind fourth-placed Chelsea.