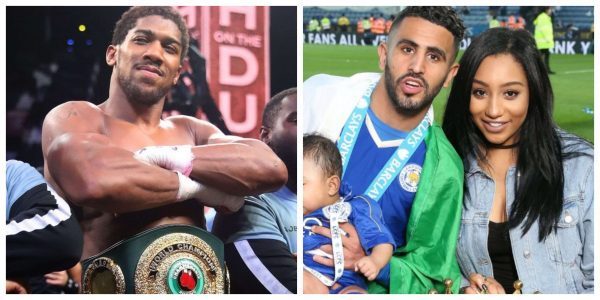 Boxing champ Anthony Joshua was reportedly approached by Man City WAG Rita Mahrez during a night out at a London club.

The 26-year-old who is a model and aspiring pop singer, was supposedly spotted with her hand on the world heavyweight champion’s knee at Tape in the city centre on Friday.

She and Riyad  have two kids and have reportedly agreed to a trial split and are living 200 miles apart.

A reveller told The Sun: “Rita bumped into AJ on her way out and he invited her to join him at his table in VIP.

“Rita, who was with a female pal, clearly thought AJ was incredibly hot. They then spent much of the evening laughing and flirting.

“He didn’t have a clue who she was. He simply thought she was a pretty girl and enjoyed their chat.

“But when the club owner pointed out she was Riyad’s wife, AJ got a bit awkward, and totally backed away.

“He explained he didn’t want to step on any toes or cause a scene, and that he’d be stupid to be seen doing anything in public.

“They left with friends at 3am, but got into separate cars.”

A spokesman for Anthony Joshua told Daily Star Online: “Anthony was approached in a night club.

They added: “He is disappointed his name is used to generate publicity in this manner.”

In November, Riyad was reportedly “furious” after boxing champ Deontay Wilder flirted with his wife.

The pair were apparently spotted “chatting intently” at a Manchester nightclub, pals claimed.

He and Rita have now reportedly left their Cheshire home after failing to fix their four-year marriage.

Back in August, his wife was slammed for driving down a motorway with both her feet on the dashboard after she posted the video to Instagram.

Rita shared footage to her 325,000 followers on Instagram, showing her stuck in traffic on an unknown Brit road.

After the vehicle moved, she was seen driving with one hand on the steering wheel and both her feet on the dashboard while her car was on cruise control.

read also:Mahrez furious with Deontay Wilder for flirting with wife at nightclub

Laughter was even heard – seemingly coming from the camerawoman and Rita – during the short video.