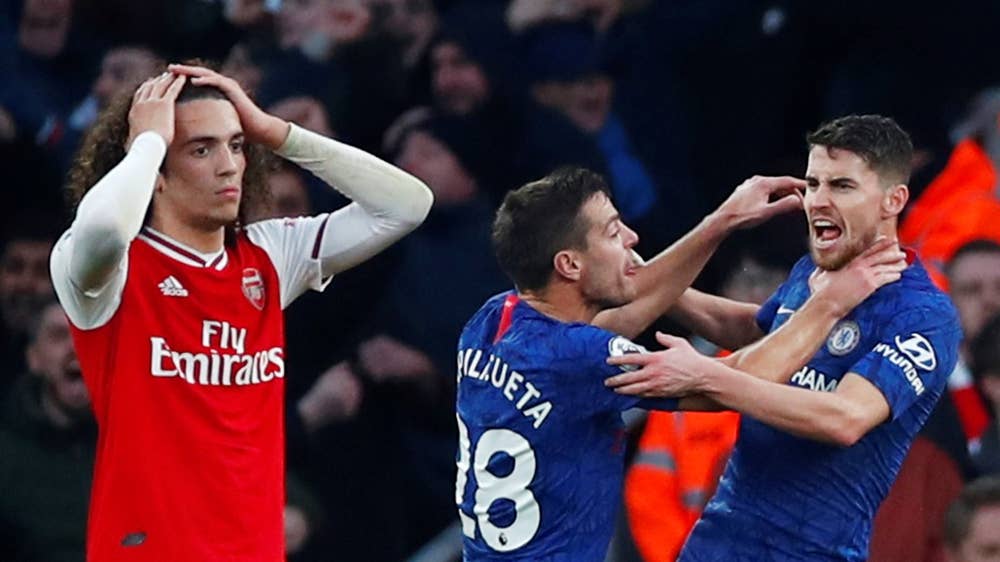 Late goals from Jorginho and Tammy Abraham completed a late turnaround as Chelsea stunned Arsenal with a 2-1 win at the Emirates Stadium.

The hosts led until the 83rd minute through Pierre-Emerick Aubameyang until an error from Bernd Leno sparked a capitulation.

Jorginho tapped home after a spill from the Arsenal goalkeeper with Abraham sliding home a winner four minutes later.

It was the Gunners who came firing out of the blocks early on, hounding the Blues in midfield areas and scanning the flanks for space in behind the full-backs.

Arsenal were dominating all areas of the pitch with Chelsea struggling to keep the ball and it was certainly no surprise when Arsenal took the lead after 13 minutes.

A well-worked set piece saw David Luiz flick towards Aubameyang at the far post and he directed his header past Kepa Arrizabalaga.

Emerson was the man guilty of letting his man go at the corner and the Italian full-back was notably struggling to contain the threat of Nelson, who got in behind once again to set up Alexandre Lacazette, but the French striker fluffed his lines.

Chelsea turn it around in the space of five minutes. pic.twitter.com/JgNWfeQrwb

Arsenal lost Chambers to a suspected knee injury a quarter of the way through and he was replaced by Shkodran Mustafi. But Arsenal’s momentum was not disturbed by the injury as they continued to make life difficult for the west London side.

With his side clearly second-best, Lampard decided to ditch the 3-4-3 and hooked Emerson, with Jorginho coming on in his place. The change appeared to give Chelsea some more balance in midfield as they improved towards the end of the half, but Arsenal comfortably – and deservedly – led at the break.

Lampard must have had a few stern words at the interval because Chelsea produced a response in the second half, showing more bravery on the ball and forcing Arsenal back.

The Chelsea coach sent on teenagers Hudson-Odoi and Tarique Lamptey to give his side an injection of pace and it appeared to work with the latter impressing.

And with just eight minutes remaining, the Blues restored parity after a horrendous error from Leno. Mount swung in a free-kick and the German stopper completely missed the punch when coming to claim, with Jorginho just tapping home at the far post.

Read Also:Chelsea captain: We must deal with our inconsistency

Arsenal went chasing upfield to try and restore the lead but were caught cold at the back as Chelsea completed a remarkable turnaround. Abraham broke forward on the counter and slipped it wide to Willian, who returned the favour and the 22-year-old slotted underneath Leno to hand the Blues the lead, which looked somewhat impossible at the break.

With seven minutes added on, the Blues played out the final minutes to hold onto a crucial victory and move four points clear of fifth-placed Manchester United, while Arsenal were left to wonder how they had let victory slip from their grasp.