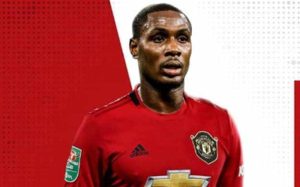 Nigerian striker, Odion Ighalo, has revealed that Manchester United lacks a striker who stays in the middle of the opponent’s box.

The former Super Eagles player joined Ole Gunnar Solskjaer’s side after agreeing on a six-month loan with Man United from Shanghai Shenhua on transfer deadline day.

Ighalo while speaking with MUTV ahead of the Red Devils clash with Chelsea on January 17 said, “I watch Man Utd’s matches and sometimes they lack a striker who stays mostly in the middle of the opponent’s box.”

“The likes of Anthony Martial and Marcus Rashford enjoy coming from the outside of the box.”

“The Red Devils need a player in the middle of the attack who can keep and hold the ball.”

“As I have watched many United’s matches, they need that physical presence there in the middle.”

“This I believe I can improve to the team under Solskjaer if everything goes fine.”