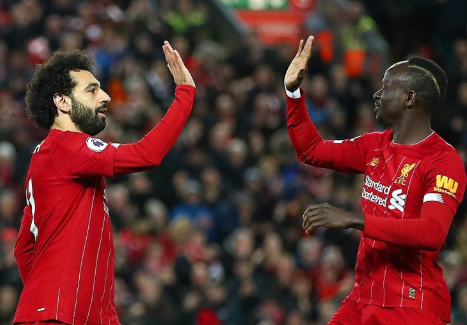 African superstars Mohamed Salah and Sadio Mane got the new year off to a fine start after guiding Premier League leaders Liverpool to victory over Sheffield United.

Jurgen Klopp was forced to make a change shortly before kick off as Guinea international Naby Keita picked up a knock in the warm-up and was withdrawn for James Milner.

The Reds got off to the perfect start as George Baldock’s slip allowed Andrew Robertson to break free down the left and pick out Salah, who slotted into the bottom corner.

The hosts continued to dazzle in the final third, but the likes of Salah and Wiljdnaldum were unable to add to the tally in the opening 20 minutes after some impressive build-up play.

Sheffield, meanwhile, initially showed a little fight after going behind, but they began to fade in the final 10 minutes of the half as the front trio were left frustrated against the Reds defence.

The hosts picked up from where they left off in the first half but they had to wait until the 64th minute for the second goal as Mane exchanged passes with Salah before firing home from close range after his initial effort was saved.

The Reds restore their 13 point lead at the top of the @premierleague after dominating at Anfield tonight.

Is this the greatest #LFC side you have ever seen?

With one eye on Sunday’s Mersyside derby against Everton, Klopp withdrew Mane for Divock Origi with just over 15 minutes remaining in the second half, while Mohammed Besic replaced Oliver Norwood for Sheffield.

The visitors should have pulled a goal back in the 86th minute but Oliver McBurnie failed turn home Jack O’Connell’s teasing cross at the far post, as the Reds clinched three points and a clean sheet.