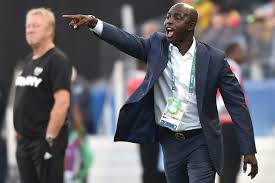 Apparently overwhelmed by the burden of financially pursuing his case at the court of Arbitration for sports (CAS), former Super Eagles Coach Samson Siasia has started a GofundMe appeal to raise the needed funds.

Siasia, who scored Nigeria’s goal in the 1-2 defeat to Argentina at the country’s first appearance at the World Cup in 1994 had the appeal created for him three days ago and is aimed  at raising  $250,000 (about N90million)

“Samson Siasia, was alleged “to have agreed to collect bribe” in relation to a football match. He was subsequently banned for life from all footballing activities, without the benefit of defending himself.

Siasia, a member of Nigeria’s famed ‘Class of ’94 Eagles,’ was handed the ban by FIFA last August.

Close associates of the former Nigeria coach revealed that he has been in depressed mood in the last few months following the saga.

Apart from the case with FIFA/CAS, his mother was kidnapped and was with the criminal gang for months before allowed to go after a ransom was paid. It was the second time the 76-year old lady was taken into custody by the kidnappers.

Siasia has continued to protest his innocence, saying he had no recollection of ever agreeing to manipulate any football match and has also said in previous interviews that members of the Super Eagles team he played with have not offered him the kind of support he needed.

“But I will fight to the last to clear my name because I know that I did nothing wrong,” he vowed