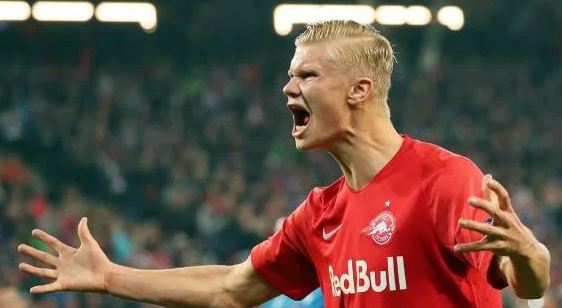 Man United are lining up a January transfer for Erling Haaland to bolster their failing attack – but won’t use him until next summer, according to reports.

The Red Devils would be willing to let the striker return to Red Bull Salzburg on loan if it gives them a better chance of sealing a deal.

According to ESPN, the Old Trafford club have been quoted a staggering £85million for the 19-year-old striker ahead of a New Year bid.

The teenager – who was born in Leeds and is the son of Alf-Inge – is under contract in Austria until 2023 after joining at the beginning of this year for £4.5m.

But he is expected to be the subject of a major bidding war if his future is not decided by the summer with the likes of Juventus, Barcelona and Real Madrid all thought to be after his signature.

So United may do everything they can to secure his services – signing him in January and loaning him back for the rest of the campaign could be a way to help do exactly that.

Haaland worked alongside Solskjaer at Molde and the Old Trafford boss eyed a move for the youngster even before he announced himself on the European stage.

The Norwegian has bagged a staggering 26 goals in just 18 appearances this season, including seven in his first four Champions League ties.

It means he is top of the pile for goalscorers in Europe’s elite competition, one clear of Robert Lewandowski and two ahead of Prem pair Son Heung-min and Raheem Sterling.

United have managed just 16 Prem goals in 12 games this season – that is just one more than Haaland has in the same number of games in the Austrian Bundesliga.
The same report suggests there are up to seven other names on Solskjaer’s New Year wishlist.

Man Utd set to make transfer offer for goal hero Erling Braut Haaland in January and loan him back to Salzburg https://t.co/8aIvY9I6nY

And the list is completed by Aston Villa duo John McGinn and Jack Grealish as well as Lyon striker Moussa Dembele.