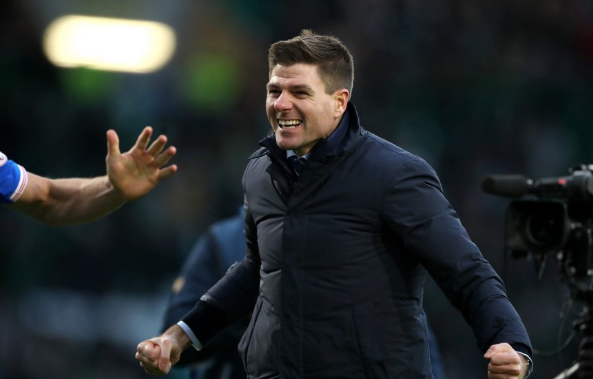 Steven Gerrard hailed Rangers’ 2-1 win at Celtic as the best feeling of his managerial career so far as the blue side of Glasgow won an Old Firm clash on enemy soil for the first time since 2010.

Ryan Kent and Nikola Katic struck either side of Odsonne Edouard’s controversial equaliser to take control of the Scottish Premiership title race.

Gerrard’s men still trail Celtic by two points, but have a game in hand on the Scottish champions as they aim to end a run of eight straight league titles for the green-and-white half of Glasgow.

“It feels the best right now,” said the former Liverpool captain on whether this was his biggest win since taking charge 18 months ago.

“It’s emotional. You can see in my reaction after the game. It’s a big moment for the team, for the club, it’s been through too much pain here.”

Celtic were left to rue Ryan Christie’s penalty miss with the score at 0-0 as they suffered a first home league defeat since May 2018.

Rangers dominated the League Cup final between the sides earlier this month, but a host of missed chances and a stunning goalkeeping performance from Fraser Forster won 10-man Celtic the trophy.

However, Gerrard believes his side’s performance in that match laid the foundations to get their reward this time round.

“Celtic took a trophy away from us, but we’ve come away with huge belief from that game,” added Gerrard.

“That’s why we’ve come here, took the game to Celtic and got a lot of joy from it.”

After a bright start from the visitors, it was Celtic who were gifted a huge chance to take the lead just after the half hour mark when Katic was penalised for holding Christopher Jullien from a corner.

Christie struck his penalty low and hard but Alan McGregor got down to his left to turn the ball to safety.

Just as the hosts were beginning to take control, Rangers scored their first goal against their bitter rivals in three games this season when Kent smashed Borna Barisic’s low cross in off the post.

The lead lasted just six minutes, though, as luck shined on Celtic when Callum McGregor’s shot deflected in off the arm of Edouard and was not spotted by referee Kevin Clancy.

Alfredo Morelos has scored 28 goals this season but had another Old Firm derby to forget as the Colombian has still not netted in 12 meetings against Celtic and was sent-off for the seventh time in two seasons deep into stoppage time.

Morelos had a huge chance to restore Rangers’ lead early in the second half but spooned over after a brilliant low cross from Kent left the goal at his mercy.

Rangers had to wait just six minutes longer to get back in front as they peppered the Celtic goal with a series of set-pieces and the pressure paid off when Katic powered home a Barisic corner.

“Big moments decide big games and you cannot give a guy a free header in our box,” said Celtic manager Neil Lennon.

Morelos saw red for the second time in three games with virtually the last action of the game as he was shown a second yellow card for diving inside the area.

However, Rangers comfortably saw out the final stages to snap Celtic’s 11-game winning streak in the league and set up a thrilling title race when the action resumes in the new year after a three-week winter break.

“I think they need a rest. We were not at our best today,” added Lennon.

“They’ve got to get really hungry now. We are not prepared to give up anything and we won’t.”