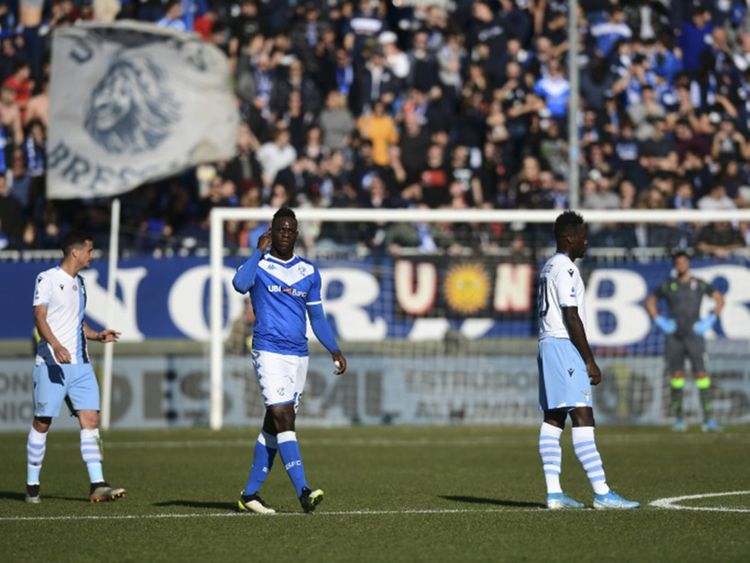 Lazio were fined $22,000 but temporarily avoided a stadium closure on Wednesday after their fans targeted Brescia striker Mario Balotelli with racist chants.

Serie A judge Gerardo Mastrandrea requested that further details on the case be handled by the Italian football federation prosecutor to determine exactly where in the stadium the chants came from, and to what extent Lazio collaborate in terms of identifying those responsible, before possible further punishment.

Sunday’s game was halted for a few minutes shortly after the half-hour mark and an announcement to stop the chants was made to fans at the stadium in Brescia.

Racism has been a problem all season in Italy with offensive chants also aimed at Romelu Lukaku, Franck Kessie, Dalbert Henrique, Miralem Pjanic, Ronaldo Vieira and Kalidou Koulibaly. All of the players targeted — except for Pjanic, who is Bosnian are black, and many of the incidents have gone unpunished.

Only recently Senegalese player Ricardo Faty regretted that the fight on racism is not having any impact as the menace continues to rear its ugly every now and then.

Ricardo Faty told Anadolu Agency recently that racism does not have a place in football, but unfortunately, it is seen in societies.

”Honestly, I don’t think they [FIFA and UEFA] are doing their job right. We know there are many ways to stop racism. They don’t do everything to finish these kind of things,” the MKE Ankaragucu midfielder said, emphasizing their weakness in combating the problem.

“For example, in England, hooliganism was eradicated. They did it very well.

But in Italy, I don’t think they take these things very seriously because there are things that happen every weekend. People aren’t scared of FIFA or a football federation.

They [football associations] have to be stronger about this,” he insisted

Balotelli who declared he desires to have painless stay with home side Brescia, has unfortunately remained a subject of racist attack from recalcitrant fans.