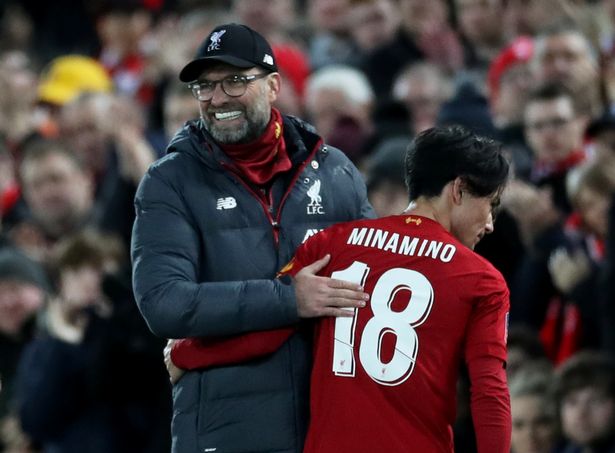 Jurgen Klopp has praised Takumi Minamino after his Liverpool debut in the FA Cup vs Everton on Sunday afternoon.

The Japan international joined the Merseyside outfit from RB Salzburg after a transfer was agreed towards the end of last month.

The Reds triggered his release clause to capture the forward for a measly £7.25m and has already been labelled ‘outstanding’ by his manager.

Minamino harried the Everton defence all match before being taken off with 20 minutes to go.

The match was settled by just one goal but what a goal it was – an absolute pearler from 18-year-old Curtis Jones, scoring his first for the Reds.

But it was Minamino who Klopp talked up after the match – who was jubilant with the result and will see his side into the fourth round of the competition.

Klopp said: “He was super, outstanding, exactly the player we wanted.

“His first game in a team he doesn’t know, he had two sessions, showing the game understanding, football skills and attitude. Outstanding.”

Liverpool fielded a significantly-weakened side at Anfield as opposed to Everton, who went full-strength.